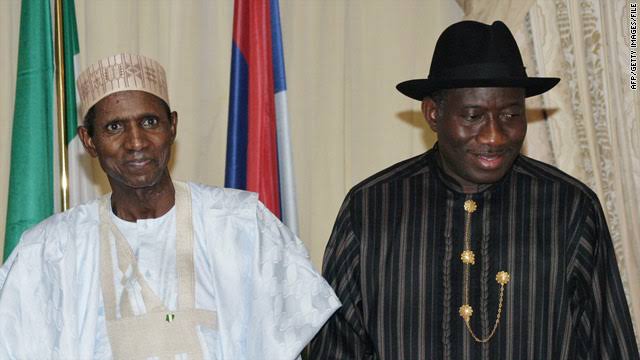 Yar’Adua served as governor of Katsina State from 29 May 1999 to 28 May 2007 before being declared the winner of the controversial Nigerian presidential election held on 21 April 2007, and was sworn in on 29 May 2007.

He passed on at the Aso Rock presidential villa after his arrival from Saudi Arabia where he went for medical treatment for Pericarditis.

And remembering his former boss in a series of tweets on Tuesday, Jonathan who took over from Yar’Adua in 2007, said, “It has been a decade since His Excellency President Umar Musa Yar’Adua was snatched by the cold hands of death.

“On this day, every year, his image fills our consciousness as a mark of his selflessness, typical modesty and exceptional flair.

“President Yar’Adua no doubt left enduring legacies in his wholehearted devotion to the ideals of democracy, respect for peoples’ rights, freedoms and reason for living as well as commitment to the rule of law and laws of equity and justice.

“I will continue to remember President Yar’Adua as a colleague and boss who became my brother and friend”.

Also remembering President Yar’Adua, incumbent President, Muhammadu Buhari described him as a patriot who deserves all the accolades.

“Despite our political differences, President Yar’Adua was unarguably a patriot because of his passion for the masses and his reversal of policies he believed were hurting ordinary Nigerians” the President was quoted as saying in a statement by Garba Shehu, his Senior Special Assistant on Media and Publicity.

“Every leader should be given the credit that he deserves, whether you agree with President Yar’Adua politically or not, I must say that history will always record his honest and sincere service to the country”.

“As we remember President Yar’Adua today, let us emulate his patience and gentle nature so that we don’t introduce toxicity into our politics where opponents perceive each other as enemies” he said.

In his own tribute, former Vice President and Presidential Candidate of the Peoples Democratic Party in the last General elections Atiku Abubakar said even time cannot erase the virtues of the former president.

“Nigerians will not forget his undisputable achievements, pro-masses policies & positive stance towards the rule of law. He is greatly missed” he said.