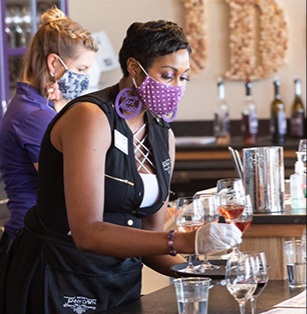 Meet Jennifer McDonald, founder of Jenny Dawn Cellars. She is the first African American entrepreneur to open an urban winery that offers handcrafted wine in Wichita, Kansas, but has also made history as the owner of the first Black-owned winery in the entire state.

Jennifer founded the business with her family in 2016 after finding out through her own consumer market research about the demand for access to fine wine in their city. While most wineries are located in rural areas, she wanted to focus on serving those in the urban areas. The city of Wichita and nearby surrounding areas has a population of more than 600,000 residents.

Her research convinced her to restore the Union Station in Wichita where she decided to build the winery. The construction took twice as long and cost twice as much as originally expected, but she managed to push through it with her determination.

Jennifer says that she was not at all exempt from the systemic racism that has sadly became common for Black people while starting their own businesses. She experienced several rejections from banks before finally finding a bank that would finance her idea.

She says, however, that she is thankful for the support system she got from her investors as well as business and wine-making mentors. She was able to overcome problems with their help and guidance.