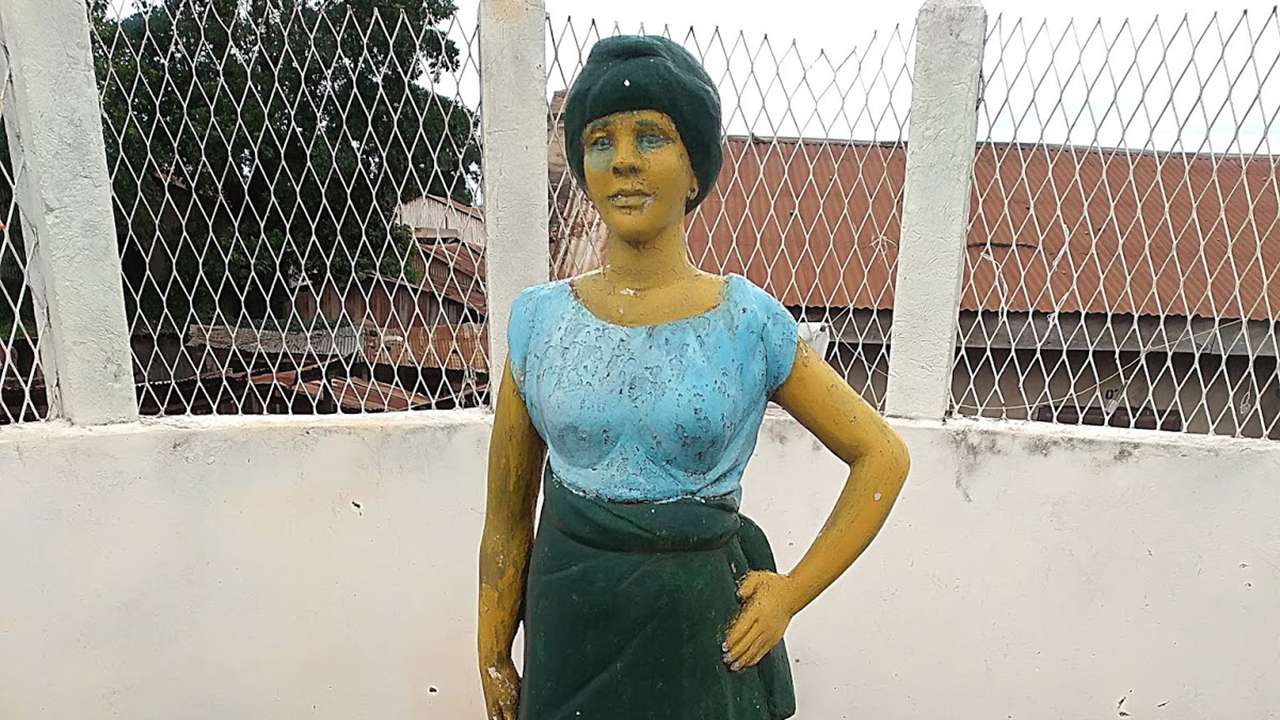 THE IGALA : WHO WE ARE
by Gabriel Oyibo

The Igala origin started from Egypt, formerly known as Kemet. Egypt was the cradle of civilization. According to Professor Gabriel Oyibo (GAGUT), “our forefathers were the inhabitants of Egypt”. They were the inventor of chemistry and mathematics (Geometry). “chem.” Means black; “mystery” (magic) that is “black magic”. When the white give a piece of stone or metal; the blacks (our fore fathers) knew the number of hydrogen ions they would add to turn it to gold. To the white then, it was black magic. With time they started realizing it was chemical reaction taking place, hence the development of the subject called chemistry. The pyramid that was built by our forefathers involved the most intelligent mathematical calculations ever done on earth.

Recent Archaeological discovery was a computer cell dating over 3, 000 years with the cell still alive. There is no doubt that other archaeological finding had shown that the oldest man on earth was found in Egypt, proving evidence that human life started from Egypt. Archaeologist has also on earthed the site of the ancient universities of Alexandria believed to be the oldest university in the world. Between 36 – 841 AD, the Arab from southern Europe invaded Egypt and drove away our people from Egypt. They started their journeys southwards.
The scattering made others to go towards the South and North East of Egypt. Some settled at Ethiopia making the Ethiopian population to constituting about 75% of Galas; indigenous language of Congolese is called Lingala by; in Ghana they speak Gaa; which is an Igala language. When you remove “N” from Ghana and replace by ‘L’ you have Ghala. There is a traditional ruler called Atta in Ghana and that is why many Ghanaians bare Atta.

When Dr. Jacob Abdullahi met bishop Gad Heward – Mill, who is of Gaa tribe from Ghana when he come to Abuja to preach in Foursquare Gospel church Garki, he was proud of his Ethnic group although he was trying to link their origin to Yoruba languages. He made him to understand that Yoruba is also an Igala language. (Please read Igala / Yoruba relationship). Angola means “the land of Galas”. Gala mean celebrity. At least, in Nigeria today and the rest of the world especially among Africans, Gala is the most celebrated in scientific breakthroughs.

Some of the Igalas on their way to the present abode settled along their routes; some Galas are presently in Sudan, Madagascar, Turkey, and Yemen, one of the Arabian countries were we still have the king as “Attah-Turk” and “Ata Gala” G.M Clifford, one of the Colonial district officer in Nigeria, stated in his book, “the Igala chiefdom” that the Igala country, (as it was then known) was variously called, Igala, Igara, Gara, Gala and early reports Atangara or Akpoto… the Eastern boundary of Igala proper ran from the River Ocheku through Agatu, Idoka, Boju, through the Idoma, Nsukka, some little above Onitsha and external fief of Igbira Panda, Igbira Igu (Koton Karfi or Akpoto Karfi) and Kakanda, whilst the Ata’s writ on the Niger itself extended from the limit of Benue, Benue confluence to the Bussa rapids where Mungo park met his end”.

Please repeat carefully these statements about the Igala country as described above by Mr. G.M Clifford the then colonial district officer at Idah. Note that the description was limited to the Igala proper. This did not include other tribes within the territory of Igala country. There is every reason for me to believe that the Igbira, Idoma, Kakanda and other tribes within this area are proper Igalas. Bassa-Nge speak almost the same language as Nupes while Bassa-Komo is of Gbagyi (Gwari) extractions and the language is almost the same. “Limits of Benue, Benue confluence, which is the very center of Igala Kingdom (Lokoja) to the Bussa rapids (New-Bussa) in the present Niger State; where Mungo Park met his end”.
Please pause and trace New-Bussa and the source (limits) of River Benue. It is a pity, and unfortunate that Igala nation with all her people and might has been submerged, reduced into a tiny geographical location called Kogi State. I believe that the sleeping giant will rise up once again from a century of slumbering and be awakened unto their responsibilities by providing good leadership that has eluded this nation!
Igalas on their way from Egypt crossing the deserts must have stayed with Jukuns (Apa), (although Aros) Apa branch have their origin in Idah. Briefly before relocating to the present abode. It is not an exaggeration that Igalas are owners and the first Nigerians to be reckoned with. The 1987 political bureau, which stated thus, backs up this historical fact.

Although controversies, claim and counter claims characterize the tradition of origins and migrations of different Nigerian people, it is important to note that certain areas of Nigeria such as the upper Benue valley, the Niger-Benue confluence (originally occupied by the Okpotos) and the central high lands of middle belt were centers of origin or parent stock from where many group in Nigeria branched out to their present abodes”.
In 1917, report to investigate as to origin of the Non-Tiv in Katsina-Ala Division, proved the existence of remnants of Igala settlement, East of Katsina River.

This report supported all the facts earlier submitted that most tribes in Nigeria came out of Igala, Bini and Jukuns. That is why Igala word is most common to other languages in Nigeria and beyond. This work erases all doubts and controversies in the report.
In early seventies (70s), there was a seminar held in order to fashion out a Lingua franca for Nigeria; a Yoruba professor of Linguistics defended the Igalas position that it should be Igala language to be adopted as lingua Franca for Nigeria. The reason is that most Igala words are found in other languages in Nigeria and beyond.
Between 16th and 17th Century, Igala had one of the best indigenous colonization in Africa; Idah became the people’s Rome, the center of civilization and learning. The most important resources in Nigeria during the pre-colonial era were the two Rivers. The most cherished and strategic point to behold and even occupy was the confluence area.

Prior to the coming of Europeans, and subsequent partition of West Africa, Igala country stretched far as to share boundaries with Onitsha, Benin and beyond the banks of the River Niger and Benue to the North. They share influences and treaties with the Igbos, Benin’s in the Southwest, Yorubas in the far West and the Hausas in the North. Their technology was also at advanced stage. Some early explorers could not hide their feelings an excerpt from their diary:
The Igala people have had mutually reinforcing relationship with major world ethnic groups. Their craft (technology) was so advanced that at close of 18th Century, Igala country produces iron and metals; cultivate cotton, tobacco and beniseed; they also manufacture coarse grass, mats and bags, cloths, clay and brass pipes, hoes and leather.
The latter is dyed black, red or yellow, and is made with anos or charms for the neck and waist, as well as being used for covering baskets, and the handles of swords and knives”.
Igala King introduced Gunu, the chief heathen deity of the Kworra and the confluence. Before the advent of the Europeans colonization, Igala religion was practiced by several groups in Nigeria. Please read an extract from records of early explorers. “The worship of Gunu is carried on in Nupe, Igara and Bassa as well as in the states of Yauri and Gbari, and is said to have been introduced about 150 years ago by an Igara King.

Gunu is believed to be the spirit of some ancestor of the Igaras, and is looked on as the great dispenser of every blessing, but more especially as the giver of children. An annual festival takes place in its honour at the end of January or the beginning of February and lasts for ten days, there being great feasting and drinking accompanied by dancing and merriment. Gunu inhabits certain groves in the country, and thither, during the festival wooden bowls of cooked food and pots of native beer (made from hocus sorghum) are carried for the propitiation of the deity, men praying on this occasion for fruitful crops (since Gunu is considered to be the controller of the elements), while childless women pray that their lot may be changed.

As had been mentioned, there is a great mortality from various causes among children in these countries, therefore should a woman who had the misfortune to lose all her children in infancy succeed in rearing one, she prefixes to its name that of Gunu, and so among the Nupes we frequently find such names as Gunu-Kolo, Gunu-Jia, Gunu-Kashi, their possesors being much respected, and deemed to be gifts from the great Gunu”. (Nupe at that time was a province of Igara).
Furthermore, Igala kernels were among export commodities to various countries in the world.

History has played a major role in shaping the landscape of the Igala country. However, the prosperity of the old Igala nation left behind a society that is endowed with abundant historical relics which tells the stages of civilization, architecture, culture, settlement, pattern etc.

Anybody viewing the map of Africa and zooming into Nigeria will see one of the greatest features; the two great Rivers that met at a point and together journeying down Southwards into the Atlantic without the waters mixing.
Each one maintaining their white and dark colours separate identities until they flow into the Delta region and emptied into the Atlantic. God is Great!……

(Professor Gabriel Audu Oyibo, called the ‘Black Einstein’ and the creator of GAGUT, which stands for the “GOD Almighty Grand Unified Theorem” which is called the ‘Theory of Everything,’ is the man who solved Einstein’s ‘Theory of Relativity.’ Prof. Gabriel Audu Oyibo has still not been given the Nobel Prize in Physics or Mathematics by the Nobel Committee although he was nominated for the Noble Prize in 2002, 2003 and 2004)