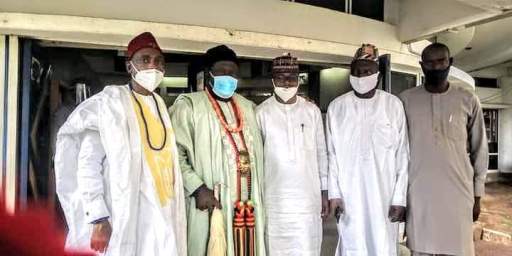 Minister of Power, Sale Mamman has directed officials of the Ministry of Power and the Transmission Company of Nigeria (TCN) to resolve the intractable power problem in Igala Kingdom of Kogi.

The Minister’s directive was conveyed to the media in a statement by Mrs Etore Thomas, Deputy Director, Press and Public Relations in the ministry on Saturday.

The minister gave the directive when the Atta of Igala, His Majesty Idakwo Michael Ameh- Oboni 11, paid him a courtesy visit in Abuja.

Mamman expressed concern that the area had been subjected to endless darkness and hardships following the failure to complete a 133/33 Kilo Volt (KVA) power project earlier awarded for the area.

The minister explained that he was informed that the contractor who handled the project died while the equipment brought to the site, including transformers, were gutted by fire.

Mamman, who summoned the ministry’s officials to the meeting, directed them to immediately work on a new proposal to award an improved 330KVA power project for more effective coverage of the area.

Earlier, the Atta of Igala expressed concern that Igala Kingdom was the only area without a transmission station, in spite its status as an industrial hub.

He noted that his people had been subjected to untold hardship and poverty occasioned by the poor supply of electricity to the area.

The traditional ruler further said that most times, his people were thrown into darkness for days, as a result, artisans and other business activities could not thrive for days.

He added that Igala Land which was endowed with huge mineral resources like, Limestone and Coal, should not be subjected to such abysmal treatment and appealed for the minister’s urgent intervention.

He was accompanied by the Oga Atta Igala, Prof. Seidu Onailo Mohammed