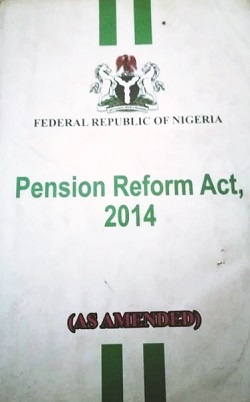 The House of Representatives has commenced the process for the amendment of the Pension Reform Act, 2014, with the view to increase the retirement benefits due to retirees or disengaged worker, from 25% to 75% immediately upon retirement and criminalize undue delay in the payment of the accrued benefits.

When amended, the section 1(C) is to read as follows: “Ensure that every person who worked in either the Public Service of the Federation, Federal Capital Territory, States and Local Government or the Private Sector receives at least 75% of his retirement benefits upon retirement, disengages or disengaged.

The proponent of the Act also seeks amendment of section 1(c) of the Pension Reform Act 2014 by adding a new paragraph (e) immediately after (d) and rearranged as follows: “make provision for payment of the remaining benefits or every benefit without delay.”

In the same vein, Hon. Aremu also proposed the amendment of Section 7 (2) by deleting the figure ’25’ inline-four and replace it with ’75’ and delete “provided that such retirement or cessation of employment and the employee does not secure another employment” and rearranged as follows:

“Where an employee voluntarily retires, disengages or is disengaged from employment as provided for under section 16 (2) and (5) of this act, the employee may with the approval of the Commission, withdraw an amount of money not exceeding 75% of the total amount credited to his retirement savings account.”

Hon. Aremu further proposed amendment to Section 8(l), by adding “all” immediately after ‘dies’ in line one and rearranged as follows: “Where an employee dies, all his entitlements under the life insurance policy maintained under section 4(5) of this act shall be paid by an underwriter to the named beneficiary in line with section 57 of the Insurance Act.

Similarly, Hon. Aremu seeks the amendment of Section 13 of the pension Reform Act 2014 is amended by adding a new paragraph (d) immediately after (0) and rearranged as follows: “Ensure prompt payment of retirement benefit without undue delay.”

In the same vein, the lawmaker seeks the amendment of section 24 of the Pension Reform Act 2014, by adding new paragraph immediately after (O) and re-arranged as follows: (P) Ensure prompt payment of retirement benefits without undue delay.

Likewise, he proposed amendment of section 99 of the Pension Reform Act 2014, by adding new subsection (5) immediately after subsection (4) and re-arranged as follow: “Any person, body, Pension Fund Administrator, or Pension Fund Custodian that withholds or unduly delays payment of retirement benefit which have been released by the Federal Government or its Agency, Commission or Body commits an offence and shall be liable to 3 years imprisonment or a fine of N2 million or both.”