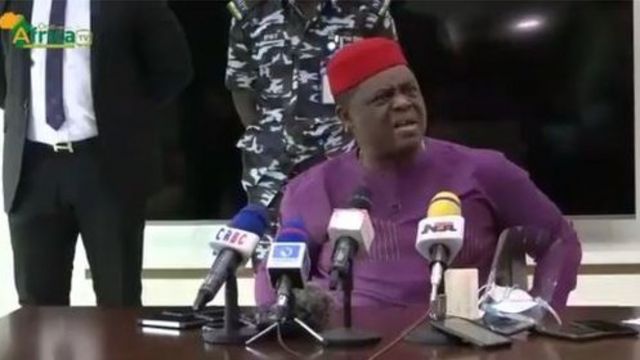 Former Minister of Aviation, Femi Fani-Kayode, has withdrawn the word ‘stupid’ he used in describing a question and a journalist who sought to know who was bankrolling his trip across states to inspect projects.

Eyo Charles of Daily Trust and journalists got more than they bargained for when FFK, ticked off by the question, went off in uncontrolled railing at the journalist and his profession as pleas went made. FFK abruptly called of the press conference and walked away.

In a series of tweets on Wednesday morning, the former minister, who has been accused of serially insulting journalists in other videos released on social media, wrote: “I met with my advisors & I wish to say the following. I hereby withdraw the word “stupid” which I used in my encounter with a journalist in Calabar. I have many friends in the media who I offended by losing my cool & using such words. I hereby express my regrets for doing so”.

“I do however wish to state categorically that no threat of physical harm was ever made to the journalist in question and neither did I send anyone to threaten him. Anyone that says otherwise is lying and I challenge them to bring the proof”.

“I would never seek to physically harm a journalist”.

“For the last 30 years I have defended & worked with journalists & fought for the right of freedom of exiression. I am also very close to many in that profession. I would be the last to seek to disparage those that are honorable and noble within its ranks. I hope that this will assuage the pain and anger of anyone that was hurt or offended by this ugly episode”.

“I have now put this matter behind me and moved on. Now my tour of the South continues. Moving to another state today”.