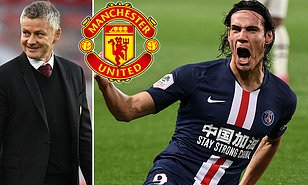 Following their 6-1 mauling by Tottenham Hotspur, last weekend,
Manchester United have rushed to complete their second transfer on Deadline Day signing following the capture of Uruguayan striker Edinson Cavani on a free transfer.

United announced Cavani’s signing on their website on Monday.

Cavani had been without a club since leaving PSG in the summer when his contract expired.

Cavani, with 341 club goals since arriving in Europe at Palermo in 2007, played for PSG for seven seasons, joining from Napoli in 2013 and is the French outfit’s top scoring player with 200 goals, usurping Zlatan Ibrahimovic for the crown in 2018.

At PSG Cavani won six Ligue 1 titles, while he has also scored 50 goals in 116 appearances for Uruguay.

Borussia Dortmund’s England winger Jadon Sancho has been the prime target for the Red Devils, but talks have not progressed.