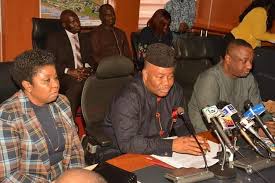 An anti-corruption organisation known as Anti-corruption and Integrity Forum has berated the National Assembly over the recent probe of the Minister of Niger Delta Affairs, Senator Godswill Akpabio and the Interim Management Committee of the Niger Delta Development Commission (NDDC) over alleged the N40 billion paid to certified contractors.

The forum discribed the probe as “diversionary and headless.”

Chairman of the forum and popular anti-corruption activist, Comrade Prince Kpokpogri, said in a statement made available to newsmen in Abuja on Friday, said the Senate recent probe of the Minister and the committee appointed by President Muhammadu Buhari to reposition the NDDC was “a needless caricature and headless task.”

The group declared that the IMC is the best thing that has happened to the NDDC since inception.

Kpokpogri said what the National Assembly was doing by inviting the Minister for Niger Delta Affairs, Akpabio for questioning on the N40 billion paid to certified contractors was a shot in the dark and legislative busy body.

“Is the National Assembly saying that contractors who were owed over a year ago should not be paid even after the contracts were certified duly executed? Are they aggrieved that some of their youth contractors had been denied opportunities for more fraudulent jobs? Or are they angry that there would be no more free money from contracts that were never executed?”, he asked.

The anti corruption crusader therefore, advised the NASS to stop chasing shadows and focus on more pressing national concern of the moment, which is Covid-19.

He said inviting Akpabio to question him on the money he got the Presidency’s approval to pay contractors is nothing but distraction, either to cover up for their laxity and inability to add value to the system or a grand plan to harm Akpabio with Covid-19 infection.

Again, he averred that the headless probe could be diversionary, even as he accused some politicians for failing to use NDDC as a conduit pipe to stack money for 2023 election.

The activist further asked that if the petition to probe the hard working Interim Management Committee of NDDC was not representing vested interest, then why must spending N40 billion to offset contractual debts become a matter of urgent public importance in an era of Coronavirus pandemic?

According to Kpokpogri, “Let me tell the world that the Senate invitation on Akpabio is just an agenda to mount pressure on him to intimidate him, just for disappointing their fraudulent antics. But he should not be perturbed; it’s only but a game.

“What about the petition against the fraudulent administration of the former acting MD of NDDC, Prof. Brambrafa, which was read at the floor of the Senate and heard during public hearing? Why has the National Assembly not come up with the outcome of the investigation? Why have those who had looted the Commission dry for themselves and their godfathers not been penalised for corrupt offences?

“I, Comrade Kpokpogri is saying that the Interim Management Committee is the best thing that has happened so far in NDDC. We have never had it this good in Niger Delta. Is the Senate saying that contractors should not be paid? It is high time this nonsense stopped.

“I call on the Presidency to disregard any blackmail against the person of Senator Akpabio. We have passed a vote of confidence on him. He is doing what the NDDC was created for, which is to better the lives of the Niger Delta people as an Interventionist Agency.

“Finally, I advise the National Assembly to find something good and of national value to do and stop chasing shadows”, Kpokpogri posited.