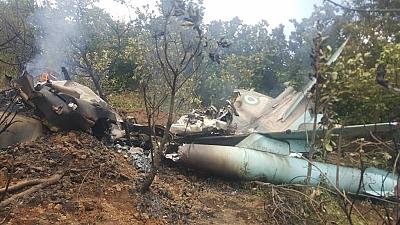 Some villagers in Bassa community in Abuja, where the Nigerian Air Force (NAF) plane crashed on Sunday, have advised aviation security experts to insist on proper flight checking before any aircraft can fly.

The villagers, who were eye-witnesses of the crash in a bush near the community, gave the advice during separate interviews with the News Agency of Nigeria (NAN).

They observed that NAF plane accident would not have occurred if the aircraft was thoroughly examined before flying.

Mr Ahmed Sani, a commercial motorcycle operator, said: “We are the first people that went there. I feel like crying because I was not happy with what I saw. If I remember what happened, I actually feel like crying the more”.

Mr Adamu Alhassan, a phone accessories seller, who canvassed for correct examination of every part of the craft before flying, said that proper check on aircraft before flying them would advance the standard of the aviation sector.

“Truly, I was at home when they called me that there was plan clash. I went there to see what happened. When I got there, I saw a lot of people complaining and also saw the plane burning.

“I saw some security agents from the airport. They also went there and put some chemical possibly to quench the fire. I also participated in some of the actions there,” he said.

Mr Johnson Michael, a dry cleaner, commended the pilot of the NAF craft for not landing the flight on the Catholic church or the primary school in the village but decided to fly further before landing in the bush.

“There was a person inside the plane shouting help, help; but we could not go further to help. Shortly, there was second explosion from the plane,” he said.