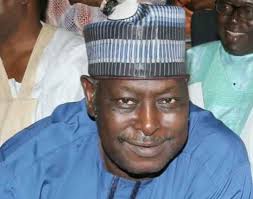 The Economic and Financial Crimes Commission EFCC on Thursday suffered yet another setback in the trial of former Secretary to the Government of the Federation SGF Engineer Babachir Lawal in alleged N544M contract fraud as none of its witnesses showed up in court to testify in the matter.

Prosecution Counsel, Mr Ofem Uket, informed Justice Jude Okeke of the Federal Capital Territory High court that although the matter was slated for continuation of trial but lamented that non of EFCC witnesses was in court.

The lawyer tendered apology over the development adding that it is not in his character to stall trial the way it happened.

Although Babachir Lawal and five other defendants were present in court, the EFCC counsel pleaded with the court to give him another opportunity to enable him reach out to the witnesses.

‘It is regrettable that non of my witnesses is in court for this trial, I wish to apologize for this and I humbly urge this honourable court to give me another adjournment. ”

Counsel to Babachir Lawal, Chief Akin Olujimi SAN, sympathized with EFCC counsel adding that the counsel had informed him of his predicament before the court started sitting.

Olujimi, a former Attorney General of the Federation AGF did not object to the EFCC’s request for an adjournment of the case.

Justice Okeke subsequently adjoined the matter to June 10 and 16 to enable EFCC put its house in order.

At the last trial, EFCC witnes,, Aminu Muhammed had cleared former SGF of any wrong doing in the award of N544M contract that led to his trial.

The witness, a Principal Procurement Officer, in the SGF office had told the court that neither Babachir Lawal nor any of the defendants in the trial participated in the bidding process or award of the contract in dispute

Muhammed who is a member of the Presidential Initiative on North East (PINE ) had testified that the body was solely responsible for the award of the contract without Babachir Lawal who was then in office as SGF.

While being cross examined by Chief Olujimi SAN, counsel for the ex-SGF, the witness had stated that non of defendants put on trial by EFCC played any role in the procurement process conducted by the Presidential Initiative.

Babachir Lawal is facing trial alongside six others in an alleged N544.1M contract fraud.

The former SGF, his brother, Hamidu Lawal, who is a director of Rholavision Engineering Limited; an employee of the company, Sulaiman Abubakar and the Managing Director of Josmon Technologies Limited, Apeh John Monday, are being prosecuted by EFCC before Justice Jude Okeke, sitting at Maitama, Abuja.

They are facing a10-count charge bordering on conspiracy and fraud.

The EFCC witness had added that none of the seven defendants was a member of any PINE committees or Ministerial Tenders Board (MTB) and did not play any roles whatsoever in the award of contracts to both Josmon and Rholavision.

The witness had also told the court that the letters of award of contracts he signed were signed after the tenders board had given approval for the award of the contracts to both Josmon and Rholavision.

He added that PINE did nothing wrong in awarding contracts to both Josmon and Rholavision.

Testifying further, the witness told Justice Okeke that he was a member of the evaluation committee of the Presidential Initiative on North-East (PINE).

According to him, after evaluating the bids submitted by companies bidding for projects by PINE, including Rholavision Engineering Limited and Josmon Technologies Limited, his committee sent reports to the Bureau of Public Procurement (BPP) and the Ministerial Tenders Board in the OSGF.

He stated that the technical reports sent by his committee was for approval by the MTB, adding that where any irregularities occurred, the reports would be sent back to PINE for correction.

“They are to check the report and approve or send it back to PINE. When the report is approved, the company gets the contracts,” he stated.

The contracts, the witness said, were awarded by PINE.

Members of the MTB, according to the witness, were Permanent Secretaries or their representatives, Directors of Legal, Finance, Procurement, Internal Audit and Press in the OSGF.

Muhammed stated that he was the person who signed the letters of award of contracts to both Rholavision Engineering Limited and Josmon Technologies Limited.

He added that it was not the MTB in the OSGF that allowed him or the PINE secretary to issue letters of award of contract.

Muhammed who is the prosecution witness number four (PW4) had further stated that about 108 companies including the fifth and sixth defendants, bided for different projects from PINE.

However in a drama that followed, counsel representing EFCC in the trial Mr Ofem Uket expressed been frustrated by witnesses coming to testify from the office of the SGF.

He opened up on his alleged frustration after leading Aminu Muhammed who testified as the fourth prosecution witness (PW4) in the case.

According to him, 80 per cent of the witnesses called by the anti corruption commission so far were from the OSGF, adding that he knew what he was facing from them.

“The witnesses I bring to court, about 80 per cent of them are all coming from OSGF,” Uket stated.

He told the court that the case was adjourned at the last sitting in January but had to be rescheduled at the instance of the fourth witness.

Justice Okeke had however, said that the court had nothing to say to the complaints raised by the prosecutor against his own witnesses.