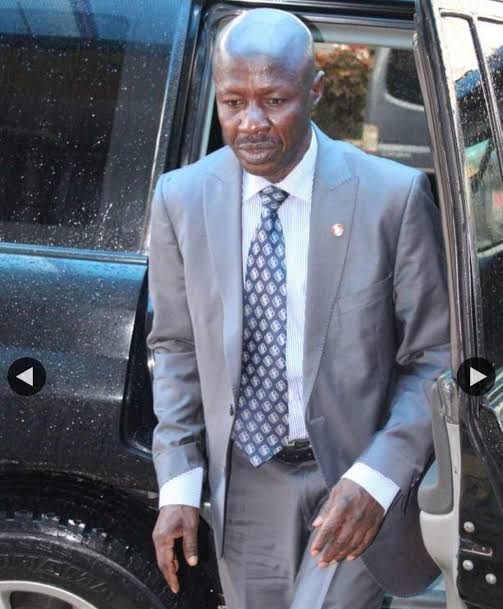 Shittu said Magu did not at any time admit guilt before the probe panel, stating that the only thing going for Magu is his conviction of his innocence.

The commission is probing the activities of the EFCC under Magu.

In a statement in Abuja, Shittu said Magu only “pleaded for justice and fair-play by the panel members in the context of his overall achievements.”

The statement said: “Our attention has been drawn to a misleading story in a certain online medium with a misleading headline – “Magu confesses, begs: I Was Overzealous as Acting Chair of EFCC, Please Save My Career.”

“We wish to state that this story was twisted fundamentally out of context by my client’s accusers who want to hit back at my client without justification.

“It is true that Magu and my humble self-addressed the panel at the conclusion of his defence while Magu clarified that he threw himself to the job of acting chair because of his passion for the anti-corruption war, a situation that may be alleged as overzealousness in some quarters.

“He, however, pleaded for justice and fair-play by the panel members in the context of his overall achievements and his fledging career which hitherto remain unblemished and will terminate in two years’ time.

“Counsel to Magu also urged the panel members in the interest of fear of God and loyalty to their conscience to ensure justice in the matter and concluded by thanking them for patience and understanding throughout the proceedings.”

Shittu said his client did not plead guilty to all the allegations against him.

He added: “At no time did Magu admit to guilt to the allegations – the subject matter of the inquiry. Indeed, the only thing going for Magu is his conviction of his innocence.

“A member of the panel had cause to inquire from me whether I am convinced that the panel will do justice to my client. I responded in the affirmative and I hope my optimism of the justice of the process at the end will not be illusory.

“As Nigerians wait on the Justice Salami- led judicial commission of inquiry to do justice in this matter, we call on commentators in the public space to comment based on facts and law and particularly based on the justice of the case.

“The Judicial Commission Inquiry inaugurated by President Muhammadu Buhari on 3rd July 2020 “……..For the Investigation of Mr. Magu Ibrahim, The Ag. Chairman Of The EFCC For Alleged Abuse Of Office And Mismanagement of Federal Government Recovered Assets and Finances From May 2015 To May 2020” has progressed appreciably with a lot of work and sacrifices by the members and all those connected to the inquiry.

“The main preoccupation of the inquiry is to unearth the truth and nothing but the truth with no grandstanding, sensationalism, dramatization or any attempt at coloration of the truth. This is the major concern of all Nigerians.

“On Friday, 25th of September, 2020, after days of sittings, Mr. Ibrahim Magu, the subject of the inquiry rendered all his defence in the proceedings and ever since that development, a lot of stories have been flying around in the public space.

“The danger is that these orchestrated stories in the public space may have the effect of shifting the real focus from the quest for facts and truth which is the real focus of the inquiry to sensationalism, half-truths, propaganda which will neither benefit either Nigerians who are interested in the real facts and truth nor the panel members who have toiled for days to execute the assignment including the subject of inquiry whose proclamation of guilt or innocence will define his future career and his perception in the public space.

“The above is the compelling need for these interventions as law officer in the temple of justice who witnessed most of the proceedings from the beginning and actually served as counsel to the subject of inquiry.

“In this intervention, I intend to be as fair and objective as possible owing my loyalty to the fear of God and my conscience.”