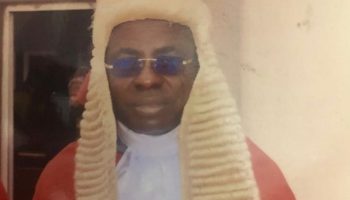 *He Was A Rare Gem – former Governor Ibrahim Idris

He was confirmed dead on Sunday at about 4pm in a private hospital in Lokoja, the State capital after a brief illness.

According to SunriseNigeria source, Justice Atadoga had been battling with high blood pressure and other ailments suspected to have increased his sugar levels.

Atadoga was said to have been rushed to the private hospital on Thursday night where he was admitted.

It was gathered that by Sunday morning, plans to transfer him to Abuja for specialist treatment were being finalised before the respected jurist gave up.

Atadoga who hails from Omala local government area of Kogi State, had been in private practice since he was called to Bar in 1986 until his appointment by the State Government.

Reports have it that the late Justice was instrumental to the creation of the Customary Court of Appeal in Kogi State.

When the Customary Court of Appeal was created, Hon Justice Otta was made president but with less than two years to retirement.

Atadoga, being the most senior Judge after Justice Otta took over as President of Customary Court of Appeal, the position he held before his death.

As expected, reactions have been coming in the wake of the late Justice’s death.

In a message of condolence to the family, Alhaji Ibrahim Idris said Kogi State judiciary has lost a rare gem. Idris recalled the patriotic roles played by the late President of the Customary Court of Appeal in 2012 that prevented a serious political lacuna in the state.

He urged the family to take his death as a supreme call from Almighty God that all and sundry must oblige at an appointed time and prayed for the family to be strong even in death of their late patriach, praying that Allah will reward him with here after.

Also reacting to death of the Kogi CCA President, the Candidate of the People’s Democratic Party (PDP) in the last Gubernatorial Election in the state, Engr Musa Wada described the death of the late Shaibu as a huge loss to the family, the judiciary, the Kogi state and the country.

According to him, “late Justice Ibrahim Shaibu Atadoga was a humble gentleman and a consummate professional who was known for fairness and justice, he has done the state and the judiciary proud in the course of discharging his duties as a legal officer”.

He said the Late Justice Ibrahim will be remembered for his enormous contributions to the development of the judiciary in Kogi state and Nigeria.

In his own reaction, the President of Ife (Omala) Development Association, Abuja, Dr James Odaudu described the death of Justice Ibrahim Shaibu as a monumental loss to the people of Omala Local Government Area, especially the windows and orphans to whom he had been a great benefactor.

According to Odaudu, the late Justice was an outstanding member of the Omala community who never backslid from whatever would bring development to his people.

“Justice Ibrahim Shaibu Atadoga was one of our best who, despite his exalted position, remained friendly, humble, accessible and a shining role model until his sudden demise. He will be greatly missed” he said.