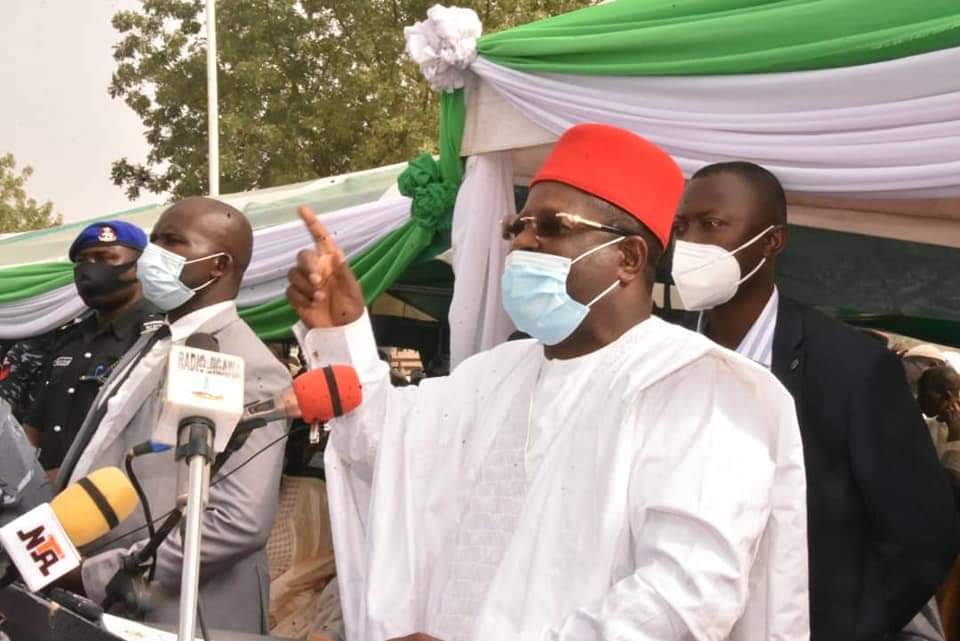 The Governor of Ebonyi State, David Umahi, has again explained why he left the Peoples Democratic Party (PDP) for the ruling All Progressives Congress (APC).

Mr Umahi, who was elected governor twice after also serving two terms as deputy governor under the PDP, defected from the party in November last year.

In Jigawa State on Saturday as the guest of Governor Muhammad Badaru, Mr Umahi said PDP’s politics of bitterness and anger drove him out of the opposition party.

Speaking to a crowd of government officials and APC supporters at a ceremony to commission a road project in Jigawa, Mr Umahi said his major problem in the PDP was that he was expected to “be castigating President Muhammadu Buhari.”

The event in Babura, the home local government area of the host governor, was attended by top APC politicians from Ebonyi and Jigawa States.

“As governor, my only boss is my wife and President Muhammadu Buhari is the overall boss of all. If you were brought up well, you will know that you don’t have to insult an elder and your boss,” the governor said.

“The president deserves our respect and support because he means well for all Nigerians and the country.

“When I was in the PDP, all the governors got support from the president to strengthen their states. This is a man that has respect for every governor, a man who never sends anybody against his enemy. He deserves our respect and support.

“Without the support of the president it would have been terrible for governors, he never showed party inclination in helping the states.

“The unity of Nigeria is very important. I urge the leaders of this country to come together and stop bitter politics. Stop bitterness and anger, let us stop sending provocative messages and comments in trying to pull down the ruling party,” Mr Umahi said.

Mr Umahi also explained that he moved to the APC to take the Igbo back into the national political centre.

He said the southeast had always been in alliance with the north, saying ”this is what we are fighting for and you need to be informed.”

Governor Badaru thanked Mr Umahi for accepting his invitation to the state and assured him of the protection of lives and property of all Nigerians in Jigawa.

Badaru corroborated Mr Umahi’s remarks on President Buhari, saying he has been fair to all the governors. He said without his support, many states would not have been able to execute infrastructural projects.

“When we came on board in 2015, the economy went into recession. 27 states were not paying workers’ salaries but the president supported the governor with bailouts and with that, we were able to pay arrears of salaries,” Mr Badaru said.

“He also gave us N10 billion each as infrastructure development fund and refunded the Paris Club deduction done to the state and local governments, without which I could not have done the roads, the electricity and the projects in the health sector.

“The federal government refunded all the money states spent on federal projects. The Governor of Rivers, Nyesom Wike, received over N70 billion. The president did that across party lines.

“He also refunded to the states all PAYE deductions and gave the states additional N1 billion support after the monthly allocation for 18 months until all states were able to stabilise,” Mr Badaru said.

Nigerians to get NIN through BVN soon – Pantami