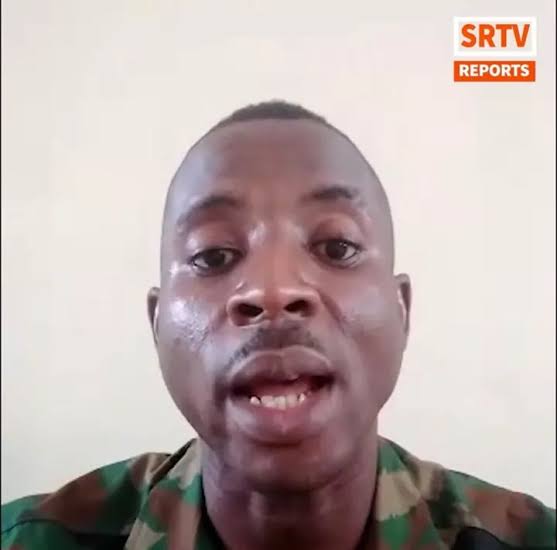 LCPL Martins was arrested after making a video blasting the Chief of Army Staff, Lt. Gen. Tukur Buratai, and other security chiefs in the country.

According to Frank, the soldier was picked by senior military officers, who said they were acting based on an “order from above.”

In the 12-minute video, the soldier expressed his anger at the security chiefs especially Buratai, and Chief of Defence Staff, General Abayomi Gabriel Olonisakin, alleging that they are not committed to end the incessant killings of Nigerians by terrorists and armed bandits.

He alleged that the military ordered the illegal detention of some soldiers, who demanded better weapons and ammunition to combat Boko Haram and other terrorist groups in the country.

He stated that though he might be arrested and probably killed for the video, he is ready to sacrifice himself for the country.

Reacting to the arrest of the Lance Corporal, Timi Frank via his verified twitter handle released a press statement where he expressed his disappointment with the Nigerian Service Chiefs. Frank called the Service Chiefs, “Service Thieves”.

Frank further said this issues of security challenges has made Nigeria to remain the way she is up till date.

Frank acknowledged how strong Nigeria military are but that they lack the needed all round supports because of corruption.

“After watching this video of a Nigerian Military Officer crying out, Nigeria is indeed in big trouble. I’m very disappointed with our service Chiefs. With this video, it is obvious we dont have Service Chiefs but Service Thieves. And that is why the country will continue to remain in a helpless state like this. May God save Nigeria!

With this video, it has clearly shown the reason why these Service Chiefs have refused to retire, even when they’re due for retirement.

Nigeria is suppose to be Giant of Africa, rather we are the Giant of Thieves. With all our military war chest we have, Nigeria still cannot defeat Boko Haram, rather a country like Chad were able to extinct Boko Haram around their region.

Nigeria has a very strong military force, but there has been no support for them to Carry out their duties, because of corruption.

I hereby call on the release of Lance Corporal. He should be celebrated, not arrested. He has Nigeria’s interests at heart.”