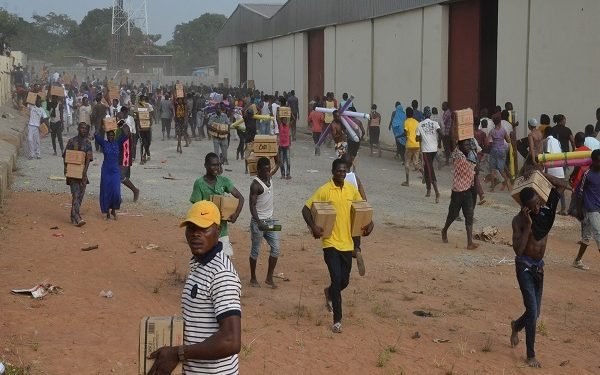 THE ongoing looting of public and private properties took a bizarre turn in Abuja when hoodlums stole items contained in nine trailers.

It happened in two consecutive days – Monday and Tuesday – in Idu Industrial layout in the Federal Capital Territory (FCT).

The arrival of security agents in 10 Hilux vehicles failed to prevent the looters, some of who drilled the fence of the firm’s warehouse and climbed walls to gain entrance.

Also on Wednesday, 35 of the 110 tractors carted away in a warehouse Yola, the Adamawa State capital, were recovered by the police.

Governor Ahmadu Fintiri has signed an Executive Order authorising house-to-house search for the remaining tractors and other items stolen by hoodlums.

Recounting the attack on the firm, General Manager Chrles Idubor said: “It’s been the most horrific and devastating experience the company has had since its inception.

The company processes food commodities such as rice, beans, sorghum, millet and others for the Nigerian local market and contract supply.

“After many warehouses had been looted on Monday at Idu Industrial Layout, the company received a distress call at about 11:30 pm that over 200 hoodlums had gained access to the factory.

“They scaled the fence and forced their way into the warehouses and carted away food products, especially rice and beans.

“We, therefore, called on the police who later came to drive away the hoodlums after much resistance that night. Some were arrested in the process.

“The next day, our chairman was there, along with the General Manager and other senior management staff to assess the damage done by these hoodlums.

“At around 9:45 am, more hoodlums, male and female, numbering over 300, gathered to our dismay at the factory gate and around the fence trying to gain entrance for further looting and vandalism.

“Efforts by our management to calm them down and make them understand that the factory had already been looted and for them to show mercy, proved abortive.”

According to Idubor, soldiers and policemen soon arrived at the premises in about 10 Hilux vans and unsuccessfully tried to calm the hoodlums down.

“When the situation could no longer be curtailed by the joint task force men, the hoodlums broke into the factory again.

“This time, some of them even bore holes through the fences.

“It was such a disheartening situation; we wondered what the country had turned into, where private companies can no longer operate in safety.

“We hereby call on the government to look into our plight. These unprecedented crises and protests have affected us so badly.”

Security agencies have been struggling to contain increasing cases of looting on government-run warehouses across the country.

Some of the storage facilities hold tonnes of relief materials, including food meant for distribution during the lockdown.

Amid the protests over police brutality, mobs have overrun many warehouses and looted food.

On Monday, residents in search of COVID-19 palliatives stormed a warehouse in Gwagwalada, Abuja.

On Tuesday, the orientation camp of the National Youth Service Corps in Kubwa, a satellite town of the Federal Capital Territory, Abuja, was invaded by looters.

They damaged property at the camp and made away with items such as mattresses, motorcycles, foodstuffs, and home and office equipment, among others.

The incident, which began around 9.20 am, threw the neighbourhood into pandemonium as soldiers shot in the air to disperse the looters, who initially defied the troops’ warning.

It was gathered that the looters aimed at the food store of the NYSC camp, which was said to have been recently restocked with bags of rice and other food items ahead of its reopening.