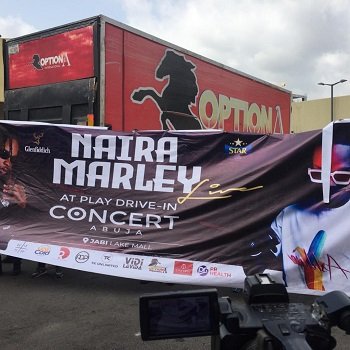 The Federal Capital Territory Administration(FCTA) has ordered the immediate closure of the popular Jabi Lake Mall for two weeks after violating the Presidential Task Force’s ban on public gatherings as part of measures to contain the spread of coronavirus pandemic.

This comes less than 24 hours after the superstar musician Azeez Fashola popularly known as Naira Marley held a concert for fun seekers around the area.

Naira Marley came under intense criticism for performing at a concert that recorded massive attendance.

SunriseNigeria gathered that Naira Marley flew in from Lagos to Abuja with Ex-BBNaija star, Kimoprah, in spite of the ban on interstate movements and flights.

Speaking to newsmen in Abuja after sealing the mall, Chairman of the Ministerial Enforcement Taskteam on COVID-19 Restrictions, Ikharo Attah, lamented despite several warnings from the Presidential Task Force on COVID-19 and the FCT Administration on guidelines to operate, the management of the Jabi Lake Mall chose to encourage and permit a concert by their customer Naira Marley and also conducting business activities exceeding the normal hours allowed by the authorities.

He disclosed the administration had secured a judgement from a mobile court headed by Magistrate Idayat Akonni who sat in the malls premises in Jabi to seal up the mall for two weeks for default of the COVID-19 protocols bearing three count charges on the Mall.

Ikharo further explained that the seal-up order was necessitated by the unlawful and embarrassing event at the mall on Friday night which had jeopardised the fight againstCOVID-19 in the FederalCapitalTerritory.

On the likelihood of declaring the musician wanted, Attah said: “He flew in to Abuja Friday from Lagos and returned back same day to the nations former Capital City”.

“We are convinced that the Lagos state govt who had in recent past had unpleasant experience with the artist will do the needful since he also breached the inter state travel ban which applies to Lagos state “.

Many Abuja residents have criticised both the organizers of the event and those who attended for holding such during the COVID-19 pandemic saga.