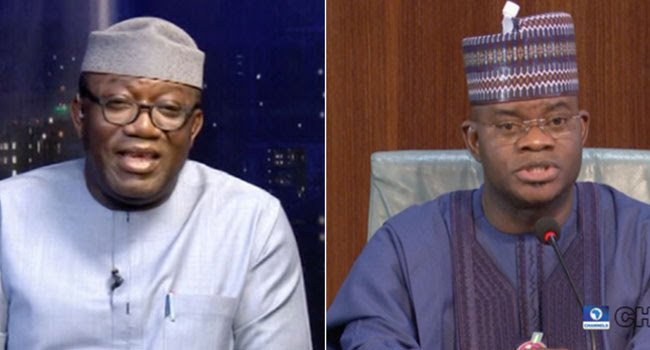 As reactions continue to trail Kogi State governor’s comment to the effect that COVID-19 vaccines were meant to kill Nigerians, the Chairman of Nigerian Governors Forum and governor of Ekiti State, Kayode Fayemi has advised Bello to be careful.

Speaking on Channels live Television on Thursday, Fayemi told Yahaya Bello to tread with care and not to risk lives of Kogi people.

Bello in a viral video declared that the COVID-19 vaccines being produced in less than one year are used to introduce new diseases that will kill many.

Since the video went.viral, the governor has been under heavy criticism from individuals and groups particularly from his political fold the ruling All Progressives Congress (APC)
Read Also: Kogi LG election: Local government administrators in panic as House of Assembly rejects SIEC list

Fayemi further opined that Kogi State Governor has a right to his reservations, the most appropriate to respond to a matter of such import is not to be dismissive, but should in a way weigh it first.

Fayemi said the preponderance at the level of the Nigerian Governors Forum believes that COVID-19 is real, adding that there is a need to respond to the challenges that have emanated from the pandemic.

The governor who says COVID-19 is not just a health issue said it behooves public office holders to work in concert with the Federal Government to get to the bottom of the problem which is not peculiar to Nigeria.

Kogi governor has insisted that there.was no COVID-19 in Kogi State. This is despite many deaths suspected to be as a result of COVID-19, but which no one dared to openly speak out.

Kogi government has been billed to receive 1,030 number of the vaccines from the Federal Government once there arrived, but which none of his officials could confirm whether they will reject the vaccines or accept them.
(Source:Capital Post)