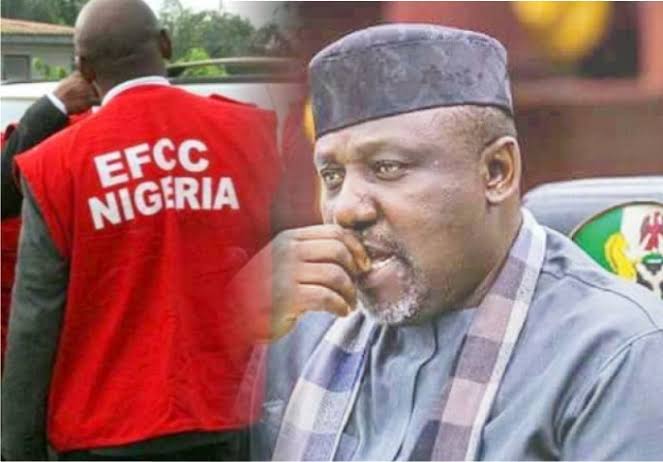 Okorocha was arrested on Tuesday, April 13, 2021, after a five-hour standoff with EFCC operatives.

EFCC’s Head of Media and Publicity, Wilson Uwujaren, said Okorocha was arrested at his private office in Abuja.

He had reportedly failed to honour multiple invitations on corruption allegations against him, forcing the agency to go after him.

Since the completion of his 8-year tenure as Governor of Imo State, Okorocha has been at loggerheads with the sitting Governor, Hope Uzodinma.

Only recently, he was arrested by the Police for trespassing on a property, Spring Palm Estate, that belonged to his wife, which was sealed on orders of Governor Uzodinma.

Okorocha had approached a Federal High Court in Abuja to stop the EFCC from investigating him on alleged financial violations after the Uzodinma-led government set up a panel to review his financial transactions as Governor of the state.

A state panel on May 10, 2020 said it uncovered N112.8 billion “dubious debts” owed the state by nine commercial banks under his watch.

Rochas, while asking the court to “direct the 1st defendant (EFCC) and the 3rd to the 10th defendants (the Imo State attorney-general (AG) and the Justice Iheaka-led probe panel on contract awards) to stay all further actions and proceedings until the 2nd defendant (the state AG) decides who should carry out the investigation,” said it was unconstitutional for the EFCC and the panel of inquiry to investigate him at the same time and on the same issue.

However, Justice Ahmed Mohammed ruked against his request, thereby giving the nod for the probes to continue.

In a confirmation of his arrest, Okorocha’s Special Adviser on Media, Sam Onwuemeodo, said it was based on petitions written by Imo State Government against him.

A statement signed by Onwuemeodo said the Imo State government wrote “petitions upon petitions” against the Senator that have been investigated by the EFCC and some “in various courts of the land”.

It continued, “The matters between EFCC and Okorocha over his governorship in Imo have been pendent in various courts of the land.

“The Commission is doing its job and should be given the needed cooperation, and Okorocha, being a law-abiding citizen, would always cooperate with the commission over the matters in courts.

“Like we stated earlier, they didn’t invite Okorocha today, for the first time”.