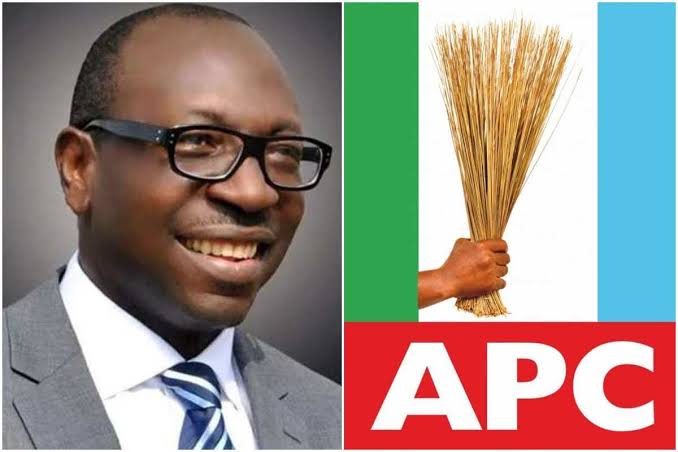 In statement issued Friday in Abuja, titled, ‘Progressive politics –which way APC? the PGF DG cautioned that Ize-Iyamu must be very visible and seen as the face of the campaign if APC wants Edo people to vote for the party’s candidate.

“It is important that immediately following the resolution of APC’s internal leadership crisis with the emergence of Mai Mala Buni Caretaker/Convention Planning Committee, internal party debate is promoted on issues of strategies to bolster our electoral viability. This should not be taken for granted. The test for all of this is Edo and Ondo governorship elections.

“How our leaders are able to work as a united front and the messages of hope and how determined we are as a party to inspire citizens into voting our candidates should be the focus. In other words, our campaigns and our candidates must project the aspirations of the people and the feature our party offers.

“Without any doubt, the signal coming from Governor Rotimi Akeredolu SAN of Ondo state after emerging as the candidate of the APC is very encouraging and clearly consistent with the kind of progressive politics APC leaders should be promoting.
Immediately after the July 21, 2020 APC primary, notwithstanding that Governor Akeredolu won the primary election convincingly with 2,458 votes with his closest rival Olusola Oke who came second polling 262 votes, Governor Akeredolu has been going round, meeting all those who contested the elections with him and negotiating reconciliation.

“This demonstrate that governor Akeredolu is magnanimous in victory, at least within the party. With this, it should be expected that Akeredolu will approach the campaigns for Ondo governorship election based on a strategy of winning the votes of Ondo people. The message he seems to be conveying is that he respects the rights of the people of Ondo state to make their choice and he is offering himself as a worthy consideration to be the choice of the people.

“The reverse seems to be the case in Edo state. As opposed to reconciliation, it is loud drums of war that has taken over the airwaves in Edo state. Comrade Oshiomhole has relocated to Edo state and taken over the APC campaign and the campaign is proceeding in a manner that suggest the Edo state governorship election is an extension of the personal battle between the Governor Obaseki and Comrade Oshiomhole.

“We need to appeal to Comrade Oshiomhole to ‘calm down’. This campaign is not about his person. More importantly, we need to stress the point that part of the political vision of any progressive is that once elected into government, we commit ourselves to issues of agricultural development, jobs creation, education, health, infrastructural development, poverty eradication and rapid technological development.

“APC has ruled Edo state since the time of Comrade Oshiomhole as governor of the state. Up to today, whatever achievement Edo State experienced under Governor Obaseki, between 2016 and now, APC must own it, just like we should be able to accept some of the setbacks. Anything Governor Obaseki is able to achieve must be credited to APC as a party. Our Edo campaign should be able to raise the awareness of Edo people that had Governor Obaseki been in PDP, it would have been impossible for him to record any achievement.

“Based on the personalised way the APC Edo State campaign is being carried out, PDP all of a sudden is coming out very strongly to campaign for votes. If the Edo State APC campaign is to go ahead this way, when APC win the election who will run the affairs of the state as Governor? Is it Comrade Oshiomhole or Pastor Ize-Iyamu? If our party want Edo people to vote for our candidate, Pastor Ize-Iyamu must be very visible and be seen as the face of the campaign.

“Comrade Oshiomhole should take a backseat and play the facilitatory role our leaders play in all similar circumstances. Lagos state governorship election since 2007 present a good model. Without any doubt, our leader, Asiwaju Bola Ahmed Tinubu, may be argued to be very influential in the emergence of candidates, from Babatunde Raji Fashola, Akinwumi Ambode to our current Governor, Babajide Sanwo-Olu. But once a candidate emerges, the responsibility of executing the campaign largely belong to the candidate on account of which the particular candidate become the face of the campaign.

“It is important that Oshiomhole endorse a situation where the party is able apply the Lagos model to the Edo State governorship campaign especially because we want the Edo people to be able to have confidence on our candidate, Ize-Iyamu and believe that when they elect him, he will be the one that will govern the state. The responsibility for ensuring that this is done rests with the Mai Mala Buni Caretaker/Convention Committee.

“Good enough, they have setup a National Campaign Council under the leadership of Abdullahi Umar Ganduje, Governor of Kano State. Governor Ganduje’s National Campaign Council should be able to assume leadership and take the necessary steps to redirect the Edo State APC campaign to have a clear progressive bearing. As part of those steps, it should ensure that APC campaign messages appropriate all development achievements recorded under the APC administration of Governor Obaseki.

“In addition, we must take steps to also cut the oxygen supply to PDP campaign, which is presenting our party and our candidate as promoters of violence. Our campaign for the Edo election should therefore amplify messages of peace and what we need to do to achieve that.
“Having come out of a very difficult crisis, our leaders and all our party members must be vigilant to ensure that our politics is not recklessly managed as to reduce us to the level of just working to win elections by all means. That is far from progressive politics. Our leaders did not make all the sacrifices they made to achieve the merger of 2013 and resolve our last leadership crisis just because we want to win elections by all means, including violent conducts.
“As progressives, our commitment to winning elections must be about earning the confidence of citizens. If anything, President Buhari should be our model at all times, especially when it borders on conducting political campaigns. It is to his credit that he never associates his political campaigns with violence since 2003, which is partly the reason he could host his political campaigns with mammoth crowd running into millions without any violent incident,” he noted.