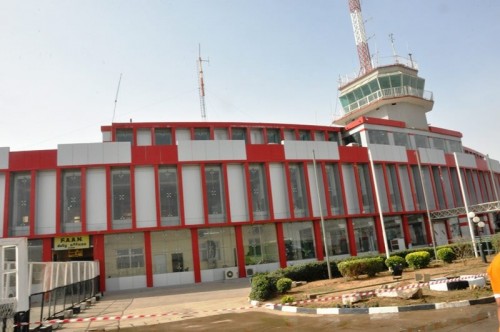 … Minister Declares Aminu Kano Airport Ready For Flight Resumption
…
The Federal Government on Saturday insisted that all airports reopened in the country for domestic flights must operate under strict adherence to the COVID-19 safety protocols in order to avert the spread of the highly contagious pandemic.

Minister of Aviation, Senator Hadi Sirika stated this stand when he led a delegation consisting of staff of the ministry, members of the Presidential Task Force on COVID-19, Senate and House Committees on Aviation to the Malam Aminu Kano International Airport, MAKIA to inspect the level of preparedness of the airport for resumption of domestic flights in Kano.

Sirika also insisted that despite the scheduled date for the reopening of airports, those found not to have satisfied the safety regulations and protocols will remain closed.

The Minister further said that the Federal Government was working tirelessly to ensure that all necessary mechanisms were put in place in all the reopened Nigerians Airports in order to protect the lives and properties of passengers, and commended the level of preparedness so far at the Aminu Kano International Airport geared towards having safe operations of domestic flights in the country.

According to him, “We commend the efforts of Nigerian Civil Aviation Authorities, NCAA and other stakeholders for a job well done because the level of work so far is impressive, talking about compliance to protocols, management of physical distancing, and security arrangements to forestall the spread of COVID-19″.

“Similarly, let me also say that all the airports will be ready before the 15th of July as scheduled but anyone that is not ready will remain closed because we cannot risk the lives of Nigerians for anything,” Sirika said.

Also speaking at the event, the National Coordinator of the Ministerial Task Force on COVID 19, Dr. Sani Aliyu expressed satisfaction with the arrangements put in place at the airports aimed at curtailing the spread of the virus during domestic flight operations.

He charged Nigerians to take responsibility for their lives, as only a strict compliance with the COVID-19 guidelines and protocols can ensure the reversal of the worrisome trend of infections.

Others who spoke to reporters at the end of the inspection including the Chairman Senate Committee on Aviation, Smart Adeyemi, House of Representatives Committee on Aviation, Nnolim Nnaji, two Senators from the State, Kabiru Gaya and Ibrahim Shekarau, both former governors of Kano State all gave kudos to the Minister for ensuring the completion of the new terminal building at the airport which is due to be commissioned soon.

They also expressed satisfaction with the level of preparedness of the Mallam Aminu Kano International Airport in meeting the safety guidelines for the operation of domestic flights.