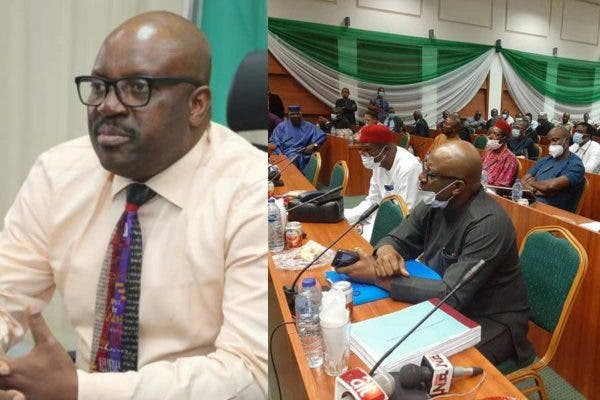 Daniel Pondei, Acting MD of the NDDC says the Senate and House of Representative Ad-hoc Committees investigating the commission are weaponizing the forensic audit against the interim management due to the implication of some lawmakers in contract scandal.

Pondei, who was reacting to a newspaper report credited to the Senate Ad-Hoc Committee that he and members of the Interim Management Committee (IMC) were collecting 30% of total contract amount from contractors before paying them, said “it is surprising and disappointing that the Senate Committee can be attributed with unproven allegations as their final report.”

The NDDC boss however said that he is not distracted by spurious allegations perpetrated by those bent on scuttling the ongoing forensic audit of the Commission.

He dismissed the allegations as unfounded and orchestrated plot by those mentioned in the contract sleaze to get back at him for daring to name and shame them for holding the Commission and the region hostage for years.

According to him, the siege on the NDDC has been broken with the naming of those who are behind the financial malfeasance and contract racketeering.

Pondei in a statement signed by his Special Adviser on Media, Edgar Ebigoni, denied that no member of the IMC or himself has ever sought for or received bribe or any other form of inducement for performing their duties.

He however said the Committee is not perturbed by “spurious claims and accusations regarding its work”.

According to the statement, “the attention of the Interim Management Committee (IMC) of the Niger Delta Development Commission (NDDC) has been drawn to the above subject of a newspaper report credited to the Senate Ad-Hoc Committee which recently investigated the alleged financial malfeasance in NDDC.

“The Acting MD stated on oath, during the probe, that he has never requested or received kickbacks of any sort, from contractors. It is therefore surprising and disappointing that the Senate Committee can be attributed with unproven allegations as their final report.”

It continued that, “the IMC is also shocked that the Ad-Hoc committee chose to believe the naysayers who claimed that the NDDC headquarters was not nearing completion; a claim that the IMC denied. Whatever made the Senate Ad-Hoc sit in Abuja to accept a negative report rather than accept the challenge of the IMC to visit the headquarters themselves, for an unbiased assessment, is yet unknown.

The statement added further that, “the IMC has been undertaking a painstaking evaluation of projects before approving any historical debt payment, no matter the level of documentary progress already recorded. Previous project valuations have been slashed and actual value of work done determined. Most emergency contractors are therefore no longer getting the humongous figures they had been promised by their co-conspirators within the Commission. The reduced payment is a saving for the Commission and the Niger Delta, not a payment for the persons in the IMC or the Commission.

“The IMC intends to steer the Commission away from questionable, low-impact projects, with quick-win projects not being excluded), into programmes of regional scale with emphasis on areas already identified in the Niger Delta Action Plan. The programmes will cascade into related projects that will mesh smoothly into a seamless whole on completion. The IMC is looking at the environmental hazards of flooding; inter region transportation including rail transportation, port development, health, education and power sectors. The new NDDC will embark on programmes beyond individual state governments and intensify collaboration with other state players in the region.

“We wish to notify Nigerians that the renewed media attacks on the IMC are part of the orchestrated plot by those mentioned in the emergency contract sleaze to get back at the IMC for daring to name and shame those who have held the Commission and the region hostage for years. The siege is finally broken.

“The Forensic Audit will actually unravel the issue of over invoicing and contract inflation, among other things. It will follow the money trail and expose those who shared such monies with the contractors.

“The IMC is irrevocably focused on delivering on its mandate to the entire people of the Niger Delta and not a select few from within and outside it. It enjoins all people of goodwill to partner with it to achieve this laudable objective.”